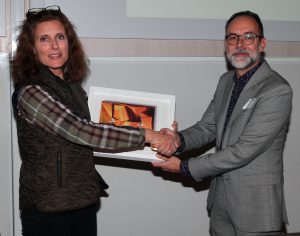 The Optics and Photonics Company of the Year 2019

Aimpoint AB is the leading manufacturer and innovator of red dot sighting technology that has set a new standard for the shooting and hunting industry by simplify aiming while meeting the highest possible requirements for reliability and ruggedness.

PhotonicSweden by giving this years’ Best optics and photonics company of the year to Aimpoint AB would like to recognize the importance of how a small group of entrepreneurs can, by combining a genuine understanding of customer needs with simple yet brilliant optical design, create a world leading product. The company has for 40 years continued to develop the red dot sighting technology to remain at the forefront of the market and have now over 3 million users worldwide. Aimpoint AB is an excellent example of how small and medium sized companies in Sweden can reach a global market and remain a growing and profitable business over time.

Additionally, PhotonicSweden would also like to emphasis that Aimpoint AB, with facilities both in Gällivare in the furthest north and Malmö in the south, has spread the optical know-how around the country and shown how to successfully create and produce high quality optical systems in all parts of Sweden.

PhotonicSweden is an economic association which was founded in 2011 in order to unify the community of the Swedish optics and photonics, including companies, R&D organizations, universities, and competence center in order to strengthen the market. PhotonicSweden enables a stronger collaboration of industry and science in being the voice for the national and international community in optics and photonics. www.photonicsweden.com

Aimpoint is a privately-owned company founded in 1974 with headquarters in Malmö, Sweden. With two manufacturing plants in Sweden, and a sales office in Manassas, Virginia USA, the Aimpoint group employs about 250 people of which the majority is involved in the assembly of the products.

Aimpoint manufactures red dot sights for hunters, competition shooters as well as military and law enforcement personal. The Aimpoint company is certified in accordance with ISO 9001:2015 and the production meets the highest standards of quality.